The AR Sandbox was developed by UC Davis W.M. Keck Centre for Active Visualization in the Earth Sciences and supported by the National Science Foundation. It allowed participants to sculpt a sand landscape in miniature from either their imagination or mimicking real-world geography. The landscape created in the sandbox was scanned by an overhead sensor (an Xbox Kinect camera) and colours and contour lines were projected (from a colour overhead projector) onto the sand which brought the sand landscape to vivid 3D life. Participants were generating rainfall by holding their hands above the augmented reality landscape to create dark billowing clouds which caused augmented reality rain to fall over that part of the sandbox world. As the rain was falling onto the landscape the water started to accumulate and flow downhill leading to flooding.

Joined by others from IGWE, including Andy Barnes (Cohort 4) and Ollie Foss (Cohort 5) they created, altered and adjusted different landscapes, made rain and attempted scenarios demonstrating the effect of flooding (e.g. flash flood from a dam break) and natural disasters (e.g. tsunami) and the engineering mitigation strategies associated with them.

The day in Swindon was a great success! The audience consisted mainly of young children, but they did manage to capture the interest of scientist enthusiasts of all ages; from parents, to grandparents, volunteers and exhibitors who all joined in the AR Sandbox fun.

Science Swindon wrote on Twitter ‘The sandbox was a real highlight, we received loads of enthusiastic feedback about it!’

Creating simplified scenarios from their research and communicating the core messages to young audiences is unique and an important quality to learn. The Swindon Science Festival 2020 was a fantastic public engagement experience as well as an enjoyable day out for all of them and they definitely plan to be there next year! 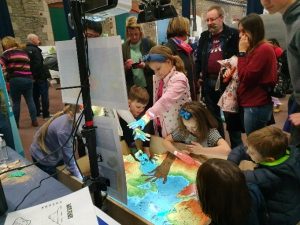 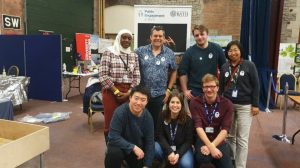